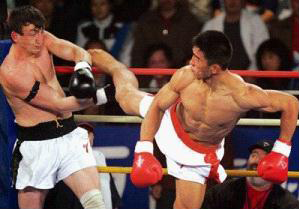 Sanda (Chinese Kick Boxing) is a Chinese hand-to-hand self-defense and actual combat sport. Sanda is a regular fighting sport of contemporary kung fu that is increasing rapidly in China and foreign countries.  Sanda competition combat developed from China Kung Fu. It is famous for the Chinese name Sanda Kickboxing.  and can use boxing gloves, head guards and a set of rules to ensure security and fairness. Modern Chinese kickboxing(Sanda) was evolved into contemporary Wushu by the Chinese authorities during the 1960’s.

Chinese Sanshou have Chinese martial arts applications that incorporate many aspects of actual combat, including grappling and striking.  In the Chinese kick boxing competition in China, takedowns and throws are permitted in competition, along with all other kinds of strikes, such as arms and legs.


Chinese Sanshou have Chinese martial arts applications that involve many aspects of actual combat, including grappling and striking.  In the Chinese kick boxing competition in China, takedowns and throws are permitted in competition along with all other kinds of striking, such as arms and legs used.

Sanda is the traditional Chinese fighting techniques and masters here teach students who desire to study Sanda with Sanda skills and techniques, theory and training methods and application and actual real combat.  Sanda is unarmed self-defense and close combat, that includes Ti (kicks), Da (punches), Shuai (Shuai Jiao), and Na (Chin Na).  Sanshou also emphasizes throws. One of the most prominent skills of Sanda is the “kick catch”. Chinese kick boxing includes the three ranges of combat kicking, punching and grappling, which adds great realism to the sport.

As an integral part of most Chinese Kung Fu competitions, Sanshou has been an important event in World Kung Fu Championships and Sanda competitions are held in more than seventy countries abroad nowadays. The rules of Sanda permit full contact punching, kicking, takedowns and throws derived from the traditional application of Chinese martial arts.