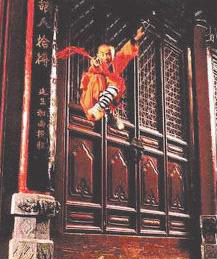 Shaolin kung fu earned its name from the temple where it was first practiced; the Shaolin Temple Monastery. This legendary temple was located in Deng Feng City of the Henan Province in northern China. Many fables and myths have been created over time which have obscured the exact origins of martial art. The Shaolin Temple was originally built as a Buddhist temple around A.D. 377 during the time of the Six dynasties (A.D. 221 -589). During this warring era, the famous Buddhist monk, venerable Da Mo (Bodhidharma), visited India to preach Buddhism. During his years long stay at the temple, he discovered that the monks in the temple were weak and unable to defend themselves. He understood that a physically healthy body was a requirement for the preparation of spiritual enlightenment and so the venerable Da Mo taught them the “Eighteen Lohan Chuan” to stay fit.

By teaching the monks this basic martial art foundation, he not only prepared them for obtaining enlightenment, but also gave them the ability to protect themselves.


Venerable Da Mo went on to further create two martial art manuals which were developed from the eighteen lohan chuan. They were called the Yi jin jing and xi sui jing. Yi jin jing is a set of breathing exercises which are to be used for chi training and is the classic document for internal force development.  Unfortunately, the original manual for xi sui jing has been lost to history. As a result of Da Mo’s teachings, he was proclaimed as the first patriarch of Shaolin kung fu. Following this was the emergence of the school of Buddhism known as Zen. First proclaimed in the 7th century in China, its teachings emphasized experiential wisdom as a means to attaining enlightenment. Shaolin kung fu was, also, only taught to the monks at the temple originally which led to their fame throughout China for their martial prowess. 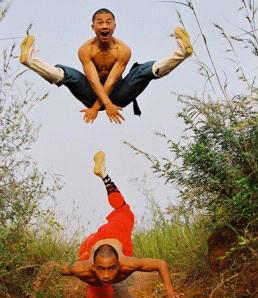 Combination of Practice & Application. After learning how to perform Shaolin Kung Fu patterns correctly, a student must learn how to use them for combat. It is not enough for a student to merely learn the combative functions of Shaolin kung fu patterns. The student must practice the uses many, many times so that they can apply the Shaolin kung fu patterns flawlessly when needed. This can be realized through combination practice.  Here, two or more students practice together using various techniques of attack and counters in order to make the students remember the movements and combinations well. The attacks and defense techniques are logically arranged to form a Combination Set.

Specific Techniques refer to Shaolin kung fu techniques used to overcome specific combat situations. Force training also plays an important role in studying kung fu. Sparring is the logical sequence of set practice, combination practice and individual techniques, and is primarily aimed at preparing the student for actual combat. Sparring can be pre-arranged or done on the fly, and can be between two partners or amongst many people. Sparring needs to be learned and practiced methodically; a person without proper pre-requisite training will not be able to make effective use of the Shaolin kung fu techniques he has previously learnt in sparring.Shaolin weapons. (Shaolin staff, Shaolin spear, Shaolin broadsword, Shaolin straight sword, etc.) Learning Shaolin weapons is an important aspect of Shaolin Kung Fu training.

The practice and application of Shaolin kung fu are guided by general as well as specific principles. If we understand the underlying principles thoroughly, we can not only perform Shaolin Kung Fu with insight, but also achieve better results with less time and effort. Knowing the principles often makes the difference between the novice (no matter how long he may have practiced the art) and the master. Their knowledge of Shaolin Kung Fu principles will enable the master to view with perception and appreciation any form of martial arts he sees, although he may not have learned it before. Most martial arts in the world are influenced in one way or another by Shaolin Kung Fu and all those different martial arts are found in Shaolin Kung Fu.

Shaolin kung fu requires great finesse and is the most profound martial art in the world. Its depth is not only in its uncountable defense techniques, but more importantly, in its inner meaning-the training of jing qi sheng, Essence, Mind-power and Intrinsic Energy